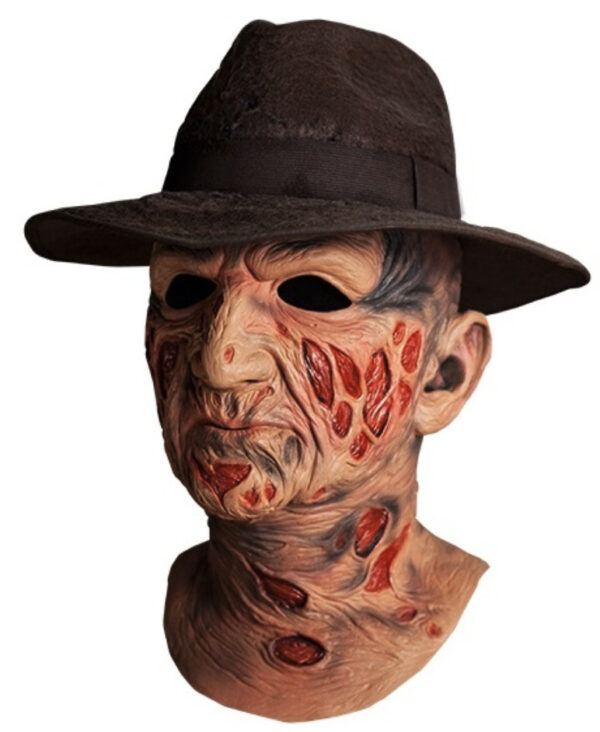 Looking to recreate the best-looking Freddy Krueger costume? Screamers have a ton of Krueger costumes and accessories, but before you shop let’s learn some history on Freddy and the Nightmare on Elm St. series.

Known as an American horror movie icon, Freddy Krueger was the fictional character of dreams from the cult classic “Nightmare on Elm Street” released in 1984. Freddy is commonly used as one of the most recognizable and easier go-to Halloween costumes. His character quickly became a pop culture icon with toy figures, video games, comic books, and clothing. Krueger’s burned and disfigured face, like in Freddy’s Revenge,  can easily be remade with latex scars. Or his face can be worn in full as a Freddy Kruger mask. The green and red striped sweaters are replicated or easy to make yourself. The most popular (and scary) piece associated with Freddy is a brown leather metal-clawed right-hand glove. Newer feature films made Freddy’s sunglasses a trend, Freddy’s trademark brown fedora hat completes the outfit that nightmares are made of.

Directed by Wes Craven the story is about the spirit of a child killer. Known as that Springwood Slasher, that was burned to death by his victim’s parents after evading prison. The concept is that Freddy Kruger is alive and can be teleported from a dream into the real world. In a dream, he is powerful and invincible and has the ability to hurt or kill an individual in their sleep. When pulled into the real world he is vulnerable as a normal human.

Throughout the Nightmare on Elm St. series, Freddy’s victims experience the dreams of young children. Most of who all are chanting a rhyme to the tune of “One, Two, Buckle My Shoe“ with the lyrics changed to “One, Two, Freddy’s coming for you.” This is often an omen to Freddy’s presence or a precursor to his attacks. Many of the attacks involve his signature scissor-fingered glove. Star Robert Englund stated he felt the character represents the subconscious fears of neglect suffered by children. In 2010 the Scream Awards nominated Freddy as the Best Villian.

There were some rumors in early 2022 that there would be a new Nightmare on Elm Street film to finish the series. A civilian producer named Wilson Cleveland had released a well-done concept movie trailer imagining Freddy Krueger returning in a Nightmare on Elm Street 2022 movie. This included Robert Englund and Paul Bailey as Freddy, with Heather Langenkamp, and Emile Hirsch joining a nightmare on elm street cast as the sole survivor of Freddy’s human alter-ego the Springwood Slasher.

Freddy Krueger has always existed as a dream demon who resides in the minds of his victims with the ability to hurt them, with results showing or ending in the real world.

The Freddy Kruger trailer producer stated that his production was only a Concept Trailer. It was not made to fool or scam anyone, it is simply for Nightmare on Elm St. fans to take a glimpse into what the movie could be like if New Line Cinema made a new sequel for the series. We think it is a good idea while the original Freddy played by Robert Englund is still alive. The popularity of Freddy over the years has allowed a marketing craze to take place. Products have transcended into non-traditional items like Freddy Krueger leggings for a haunted yoga session, or give your Wresting Superstars a challenge when they battle the Freddy Krueger action figure. He comes dressed for any event with a special tuxedo.

Wes Craven stated that his cart is what inspired him to make the claw glove that made Freddy popular as a top Freddy Krueger Halloween costume. “Part of the objective was to make it memorable, that he had a unique weapon”, stated Craven. He wanted a primal fear that could be embedded in the subculture of fans. Like a machete or a chain saw in other popular horror movies he wanted the glove to look like something that was made by a person who had experience working with boilers.

In the 2010 film remake, the glove was redesigned as a metal gauntlet with four finger bars however, still patterned after the traditional design. To much fanfare, the Krueger glove has appeared in Evil Dead II and The Bride of Chucky. As a producer-to-producer joke, Freddy’s glove was included in an evidence locker room that also had remains of Leatherface’s chainsaw, Michael Myers masks from Halloween, and Jason Vorhees from Friday the 13th.

The popular Nightmare on Elm Street game was made in 1989 by LJN Toys. Freddy was the most downloaded character in the video game Mortal Kombat, becoming the second non-original character to be added. In the video game, Krueger arms himself with two razor claws to battle Kahn. Krueger went on to become playable in the mobile edition of the game’s sequel, Mortal Kombat X, alongside Jason from Friday the 13th. 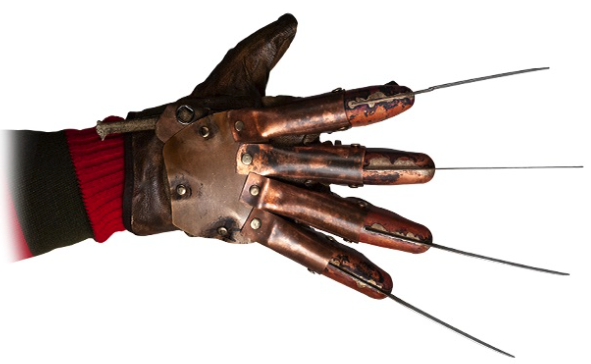 Make Your Own Freddy Krueger Glove

Popular YouTuber “Odin Makes” actually has a step-by-step video that shows you how to make a cheap Freddy Krueger glove. Need to go cheaper and less lethal? There are many Freddy Krueger plastic knife gloves for kids available. The instructions are actually very simple and affordable to do however, for those that do not want to get too crazy with fabrications Screamers Costumes has ready-to-ship Freddy Krueger gloves that are near replicas of the movie props. 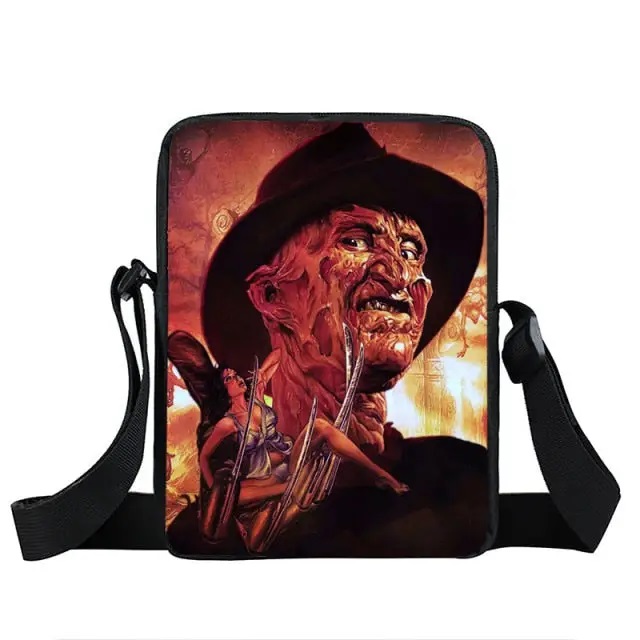